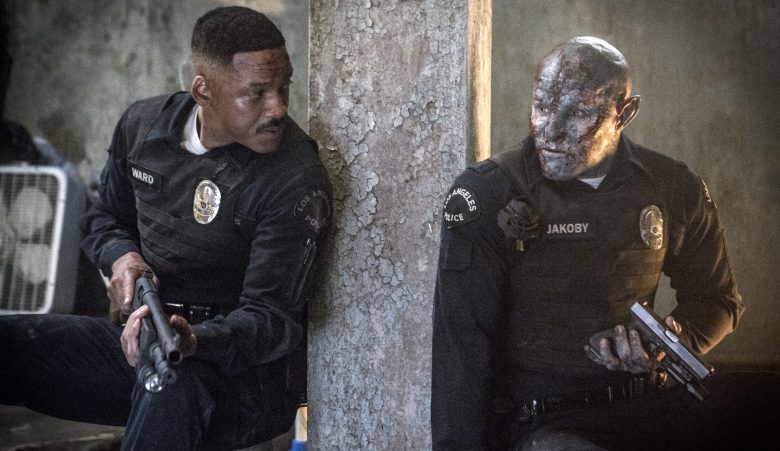 „There’s boring, there’s bad, and then there’s “Bright,” a movie so profoundly awful that Republicans will probably try to pass it into law over Christmas break. From the director of “Suicide Squad” and the writer of “Victor Frankenstein” comes a fresh slice of hell that somehow represents new lows for them both — a dull and painfully derivative ordeal that often feels like it was made just to put those earlier misfires into perspective. (…)

Will Smith, in a hangdog performance so dispiriting that it might genuinely make you pity one of the world’s most successful people, stars as Daryl Ward, a second lieutenant who was just shot in the line of duty. (…)

Truth be told, “Bright” is so wretched that it invites only the most cynical of interpretations, leaving you with no choice but to assume the film was tainted by the knowledge that most of its audience would see it on their phones or laptops. Ayer’s dim and sloppy action set-pieces look wildly out of place on a movie screen (they’re so bland you almost expect Iron Fist to show up), and the constipated dialogue scenes that surround them tend to repeat the same points ad nauseam, as though they were written to accommodate a teenage kid who’s multi-tasking between the movie he’s watching in one window and the porn he’s streaming in another. (…)

Forget about staying woke, “Bright” doesn’t even care if you’re really watching. Without exaggeration, the final dialogue exchange in this movie is so punishingly drawn out that you might start wondering what you did wrong. But please, if you’re going to watch this, watch this at home. Netflix’s release plan remains unclear, but you couldn’t have a worse experience in a movie theater if you saw “Salò, or the 120 Days of Sodom” in 4DX. (…)

Potentially a dark harbinger of things to come, “Bright” isn’t only the worst film of 2017, it could be responsible for many of the worst films of 2018 and beyond. If this gambit pays off — if Netflix fortifies their assault on the theatrical experience by internally developing blockbuster-sized movies that are even semi-consciously optimized for disinterested audiences — then it’s hard to imagine how dark the future of feature-length filmmaking might be. Here’s one indication: Shortly before the embargo on “Bright” reviews was lifted, Netflix announced that a sequel to “Bright” is already in the works.“