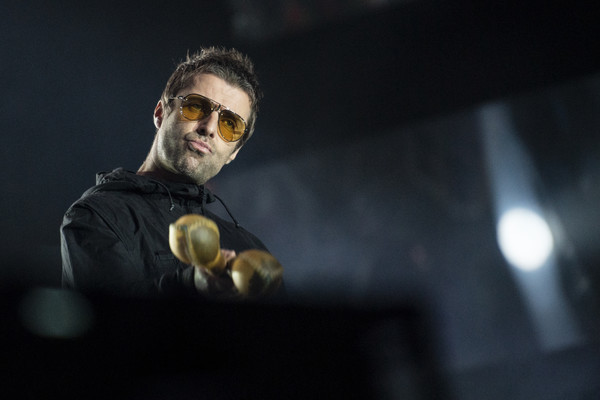 Noel: „Liam is rude, arrogant, intimidating and lazy. He’s the angriest man you’ll ever meet. He’s like a man with a fork in a world of soup.”

„There’s plenty of people trying to do that Oasis thing, right, and you’ll get people saying it’s rock and roll. Well, rock and roll it might be, but it’s f—ing shit. It’s unsophisticated music for unsophisticated people. It might sound like the f—ing Stooges, but it is shit.

You recently played Manchester on the 10th anniversary of Oasis’ last gig there, and people assumed that can’t just have been a coincidence.

It was a coincidence, actually. What is it with journalists? Coincidence doesn’t exist in the world of journalism. It always has to be like, “Oh, you must have done that because of this.” And you sit there reading things sometimes thinking, honestly, life is so f—ing random. Do you think I’d book a gig on the 10th anniversary of an Oasis gig just so somebody could write about it? I don’t give a f— about that. Or somebody will say, “You’ve got a single out the day Liam’s got a new haircut. Was that deliberate?” What? I’ve got better things to do with my time than sit and look around people’s calendars and see what I can do. Life’s too short for that.

Liam’s new documentary, “As It Was,” but there was talk that you objected to having Oasis songs included. Is that true?

Oh, I turned it down, yeah. If some f—ing moron is going to make a film slagging me off, calling my wife a c—, after trolling my kids on the Internet, after being a filthy little misogynist sexist prick who cannot keep his f—ing mouth off Twitter, and then call me to ask me a favor, I’m like, “Wow. You are as dumb as you f—ing look.” I don’t give a f— what music you have in your film; you’re not putting any of mine in. It’s like, “Can I ask you a favor?” “No, you can’t. Go f— yourself.” You’re not using my songs to sell his f—ing film. (…)
I couldn’t think of a reason that would make me want to watch it, considering that every time I see that c—’s face, I want to f—ing take out a McDonald’s with a machine gun. So I don’t think I’ll be going to the local cinema to watch him rewrite f—ing history (about) what a great guy he is; what a wonderful family man. I’ve got better things to do with my time. You should go and see it, though. Apparently there’s a lot of jogging in it. I don’t know about you, but I like to see my favorite rock stars jogging. Don’t you?

You may not be a Taylor Swift fan, either, but there’s a business story going on. Do you ever care about trying to get your masters back or that aspect of the business?

No, the game is the game. You don’t own your own f—ing shit, which is why when I finally left Oasis, I started my own record label, because I wanted to own them. But I’m aware of the story of Taylor Swift and some idiot called f—ing Scooter. Scooter? Is that even a real name? [He adopts an American surfer accent.] “Scooter. F—ing Scooter.” Um, I’m not a fan of Taylor Swift. I’m less of a fan of Scooter Brown or whatever his f—ing name is. They’re just American idiots. Which, really, I’d be f—ing ashamed of them, if I were you. (…)

Lewis Capaldi. [Besides wearing the T-shirt, the young star posted a video saying, “Noel Gallagher has just slagged me off. This is dreams coming true. It’s Father’s Day, I’m being slagged off by a man who is old enough to be my Da’ and I’ve never been more happy.”]

F—ing Chewbacca should enjoy his 15 minutes. The greatest day of his life that I slagged him off or called him an idiot. It’s the greatest day of his f—ing life so far. He’s just thinking, “Wow!” Well, I know you’re Scottish and all that, but f—ing hell! It is like a third world country, but for f—‘s sake, man, you must have had a better day than this. Surely!

So, I don’t know. The youth of today: f—ing moronic c—s, if you ask me. … I meet young people, and they’re so culturally lost at the moment. All they can do, young people, is take pictures of each other. Because there’s nothing else. You know, when a band walks out on stage, they might as well be at a photo shoot.“